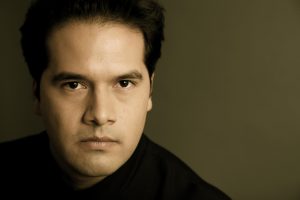 Robert Trevino has rapidly emerged as one of the most exciting American conductors performing today. Trevino burst into the international spotlight at the Bolshoi Theater in December 2013, when he led a new production of Verdi’s Don Carlo, substituting for Vasily Sinaisky.  He was subsequently nominated for a Golden Mask award.

With a career developed under the guidance of renowned conductors such as David Zinman, Seiji Ozawa, Michael Tilson Thomas and Leif Segerstam, Robert Trevino has been rewarded at the Evgeny Svetlanov International Contest in 2010. He has been a conductor of New York City Opera from 2009 to 2011 and of Cincinnati Symphony Orchestra from 2011 to 2015.

He is currently Music Director of the Basque National Orchestra and recently he has been appointed as principal conductor of Malmö Symphony Orchestra starting from the 2019 / 2020 season.