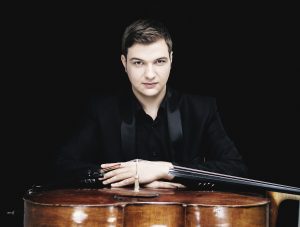 Described by The Times magazine as “one of the most captivating cellists who emerged in the last decade”, Andrei Ioniţă has won the First Prize at the Tchaikovsky Competition in 2015 and a series of awards at ARD, Emanuel Feuermann and Aram Khachaturian competitions. In 2016 he was named a BBC New Generation Artist for 2016 – 2018.

In 2018-19 he returns to the BBC Philharmonic (with John Storgårds) and Hamburger Symphoniker (Ion Marin); makes debut appearences with the Danish Radio Symphony Orchestra (Yuri Temirkanov), Russian National Orchestra (Mikhail Pletnev) and Grand Rapids Symphony Orchestra (Marcelo Lehninger); tours the US with the Romanian Youth Orchestra (with Cristian Macelaru); and gives recital at LAC Lugano, Zurich Tonhalle and Kings Place in London. He will also act as Artistic Director of the Alpenarte Festival in Schwarzenberg in October 2018.