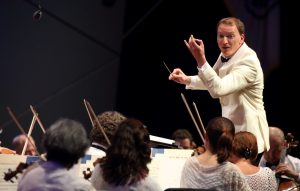 Moritz Gnann has received outstanding reviews for his fresh approach to a wide range of symphonic and operatic repertoire reaching from renaissance to contemporary.

Born in Tübingen, Germany, Moritz Gnann studied conducting at the Universität der Künste in Berlin and Dresden. He gained further experience through active participation in masterclasses and through close collaboration with Andris Nelsons, Donald Runnicles, Simon Rattle and Christian Thielemann. He collaborated with Andris Nelsons for the opera shows Lohengrin and Parsifal by Richard Wagner at the Bayreuth Festival. Since 2015 he has collaborated as an assistant conductor with the Boston Symphony Orchestra, together with whom he has given memorable concerts during the Tanglewood Festival.

Moritz Gnann has been at the same time a guest conductor of opera houses in Germany. In the new season he will conduct opera shows at Deutsche Oper in Berlin and Semperoper in Dresden. He will also make his debut at the Gewandhaus in Leipzig, together with MDR Symphony Orchestra.