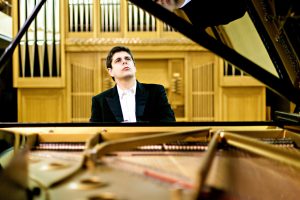 Described by the international media as a pianist of impeccable and refined tastes in choosing his repertoire, Spanish pianist Javier Perianes has been giving concerts and recitals on five continents. He has performed in some of the world’s most prestigious venues, including Carnegie Hall in New York, the Barbican Hall in London, The Great Hall of the Moscow Conservatory, Suntory Hall in Tokyo and Teatro Colón in Buenos Aires. He has collaborated with renowned conductors such as Daniel Barenboim, Charles Dutoit, Gustavo Dudamel, Zubin Mehta, Lorin Maazel, Daniel Harding şi Yuri Temirkanov and has been a guest of music festivals in Spain, France, Switzerland and Germany.

Since 2007 he has recorded exclusively for the Harmonia Mundi label, while his discography ranges a vast repertoire, from classical and romantic music to compositions authored by musicians of his country. His Grieg Piano Concerto and a selection of Lyric Pieces, was widely praised by the critics and described as ​“a new benchmark” by Classica, which awarded it a ​‘Choc’; it was also Editor’s Choice in Gramophone and Maestro in Pianiste magazine. This season, Perianes returns to the studio to record Schubert’s Sonata in B flat major, D.960 and Sonata in A major D.664 as well as making a recording of Bartók’s Piano Concerto No.3 with the Münchner Philharmoniker and Pablo Heras-Casado.