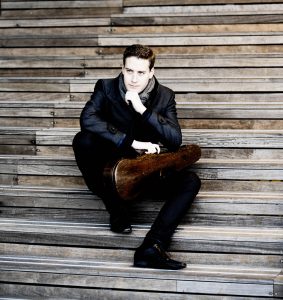 Violinist Kristóf Baráti is gaining world recognition for the extraordinary quality of his musicianship, characterized by a vast repertoire and an impeccably mastered technique. He performs regularly in his native country, Hungary, where he gives recitals, symphony and chamber music concerts. He has been a highly acclaimed guest of top symphony orchestras in Europe, North America and Asia. He has performed with such renowned musicians as Jean-Efflam Bavouzet, Mischa Maisky, Yuri Bashmet, Miklós Perényi and Nikolai Lugansky.

In 2016 he made a sensational debut at the Verbier Festival, performing the complete solo Sonatas and Partitas by Bach. His discography comprises the aforementioned works of Bach, sonatas by Beethoven, Brahms, Ysaÿe, Ravel and Bartók and concertos by Mozart, Paganini and Korngold.

In 2014 he has won the Kossuth Prize, the highest cultural award in Hungary.
Kristóf Baráti plays the Stradivarius “Lady Harmsworth” violin from 1703, kindly offered by the Stradivarius Society of Chicago.