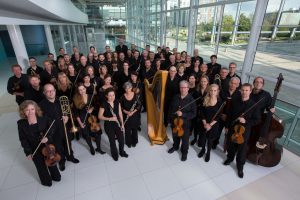 The BBC Philharmonic, known for its innovative and versatile music-making, has its home in Salford and enjoys worldwide recognition. Driven by a commitment to make the orchestral experience accessible to all, its adventurous approach to programming places new and neglected music in the context of the established classical canon.

As one of the BBC’s six Orchestras and Choirs the orchestra performs over 100 concerts a year for broadcast on BBC Radio 3 and, with a purpose-built studio in BBC North’s MediaCityUK home in Salford Quays, the orchestra welcomes over 5,000 people every year to its free studio concerts. The orchestra’s passion for bringing classical music to new audiences has seen collaborations with Clean Bandit, The 1975, Jarvis Cocker, Will Young, The Courteeners, Rag’n’Bone Man, Elbow and The xx.

The orchestra also uses the studio to record for CD/download and has delivered over 250 recordings for Chandos, selling close to one million albums.

Performing across the North of England and beyond – with regular concerts in Leeds, Hanley, Kendal, Hull, Sheffield, Blackburn, Carlisle and Nottingham – the orchestra is resident each year at Manchester’s Bridgewater Hall and appears annually at the Royal Albert Hall as part of the BBC Proms. Internationally-renowned, the BBC Philharmonic also tours Europe and Asia, has performed in America and China and was touring Japan during the 2011 earthquake and tsunami.