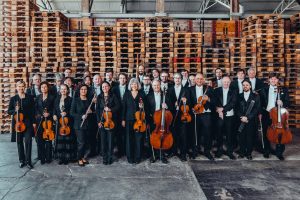 Orchestra della Svizzera Italiana (OSI), established in 1935, initially as the Orchestra della Radio della Svizzera Italiana, has played a crucial role in the musical and cultural development of the region. OSI has facilitated the foundation of several music festivals, such as the festivals in Lugano, Locarno and Ascona, which continue to be internationally acclaimed nowadays as well. Ernest Ansermet, Igor Stravinsky, Leopold Stokowski, Sergiu Celibidache and Hermann Scherchen have been some of the renowned conductors who have directed the orchestra, while some other famous composers of the 20th century have seen their works performed by the ensemble – among them, Richard Strauss, Arthur Honegger, Darius Milhaud, Frank Martin and Paul  Hindemith, and more recently Luciano Berio and Krzysztof Penderecki.

Supported by Ticino Canton, the Radiotelevisione Svizzera, the Municipality of Lugano and the Associazione degli Amici dell’OSI, the orchestra is one of the thirteen professional orchestras currently active in Switzerland. The OSI season concerts are broadcast on RSI Rete Due, while the ensemble regularly takes part in the Lugano Festival, Settimane Musicali di Ascona and the Martha Argerich Project.