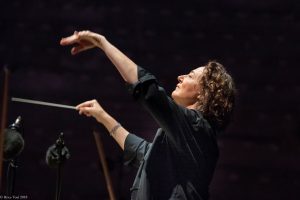 Nathalie Stutzmann is considered one of the most outstanding musical personalities of our time, with parallel careers as a world-renowned contralto and as a rising star conductor. Her charismatic musicianship, combined with the unique rigour, energy and fantasy which characterises her style, has been recognised by her peers, audience and critics alike. She studied in Paris, where she focused on lied music under the guidance of Hans Hotter. At the same time she studied conducting with such renowned conductors as Jorma Panula, Seiji Ozawa and Sir Simon Rattle.

Proclaimed “the best contralto in the world“ (BR Klassik), Nathalie Stutzmann has performed over 300 recitals together with Swedish pianist Inger Södergren.

As a conductor, she has gained her reputation in the field of opera – a highly appreciated performance in this direction has been during the Chorégies d’Orange Festival in Provence in 2018. Starting with the 2018 / 2019 season, she collaborates as a principal conductor with the Kristiansand Symphony Orchestra in Norway, and is currently performing as principal guest conductor of the RTÉ National Symphony Orchestra, a position she has held since 2017.