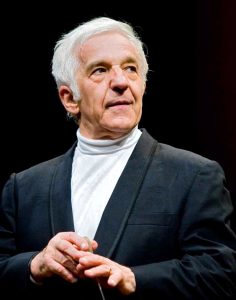 Among the foremost musical figures of our time, with an outstanding international career which makes him one of the top pianists worldwide, Vladimir Ashkenazy is also highly appreciated as an extremely refined conductor. He is currently principal guest conductor of Orchestra della Svizzera italiana and also Conductor Laureate of Philharmonia Orchestra, NHK Symphony Orchestra, Iceland Symphony Orchestra. Since last summer, Vladimir Ashkenazy has occupied the same position for Sydney Symphony Orchestra.
He has inspired and trained new generations of musicians during the period in which he has served as a conductor and musical director of the European Union Youth Orchestra.

His impressively varied discography has been acclaimed both by music lovers and specialists.
To mark the 80th birthday of Vladimir Ashkenazy in 2017, Decca Classics has celebrated the prolific output of its longest-serving artist with a new album of Bach’s French Suites, two new box sets – his Complete Concerto recordings and a personal selection of solo and chamber works – plus six vinyl reissues of his legendary recordings.